Saint Spyridon, in iconography of  Orthodox Churches from Bucharest

Our father among the saints Spyridon of Trimythous the Wonderworker was a fourth century bishop who was present at the First Ecumenical Council. He is also commonly referred to in Corfu as Keeper of the City. He is commemorated by the church on December 12.

Spyridon was born in the village of Ashia (askia - "without shade"), Cyprus (270 AD) and died in Trimythous, Cyprus (348 AD). He was a peasant farmer and shepherd and was not educated. Spyridon was married and had a daughter, Irene. After his wife died, he and his daughter both entered into monasticism. He later became the Bishop of Trimythous (during the reign of Constantine the Great) and continued in piety for which he was greatly known.

He is the patron saint of potters (from the miracle of the potsherd).

Though not well-educated, he surprised everyone at the Council of Nicea by converting a famous philosopher to Orthodoxy from Arianism. He explained the unity and diversity of the Trinity by holding up a brick, then commonly thought to be a combination of the elements fire, earth and water; as he spoke, fire blazed from the top of the brick while water gushed out underneath. There too, at Nicea, he met St. Nicholas of Myra, with whom he formed a lasting friendship.

Through simplicity and deep devotion to God, he worked miracles throughout his life and became known as a great wonder-worker, calling forth rain in the midst of drought, casting out demons with a single word, healing the sick and even raising people from the dead, in addition to having the gift of prescience.

When he arrived back home from Nicea a woman told him that she had given his daughter, who had died while he was away, some jewelry for safekeeping. Now that his daughter was dead, no one could find where she had put them. Spyridon went to his daughter's grave, spoke to her, and was able to restore the jewelry to its owner.

Another time, hastening to save his friend, who had been falsely accused and sentenced to death, the saint was hindered on his way by the unanticipated flooding of a stream. The saint commanded the water: “Halt! For the Lord of all the world commands that you permit me to cross so that a man may be saved.” The will of the saint was fulfilled, and he crossed over happily to the other shore. The judge, apprised of the miracle that had occurred, received Saint Spyridon with esteem and set his friend free.

There is also the tale by Socrates Scholasticus about how robbers planned to steal the sheep of Saint Spyridon. They broke into the sheepfold at night, but here they found themselves all tied up by some invisible power. When morning came the saint went to his flock, and seeing the tied-up robbers, he prayed and released them. For a long while he advised them to leave their path of iniquity and earn their livelihood by respectable work. Then he made them a gift of a sheep and sending them off, the saint said kindly, “Take this for your trouble, so that you did not spend a sleepless night in vain.”

Also during a famine Spyridon changed a snake into gold pieces so that a poor man could buy food from a greedy merchant who had cornered the supply.

One day there was only himself and the deacon and readers in church at vespers, and the responses could be heard beautifully chanted by an unseen choir. The music was so beautiful that others, passing by, heard it and saw through the windows what seemed like a large congregation. Entering the church, however, they found only St. Spyridon and his assistants.

To this day St. Spyridon's incorrupt relics at his shrine in Corfu continue to manifest the power of God, wondrous in His saints. He is called the "walking saint" because the silk slippers which clothe the feet of his relics wear out each year and are replaced on his feast day.

Other beautiful Churchin Bucharest dedicated to the Father is Saint Spyridon the New Church, a Romanian Orthodox church in Bucharest on Calea Șerban Vodă, no. 29. Originally built with gothic influences in 1860, it was strongly modified by PatriarchJustinian (especially the towers). The renascentist paiting was made by the famous Romanian painter Gheorghe Tattarascu. 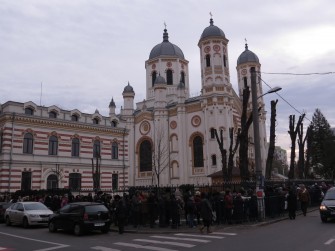 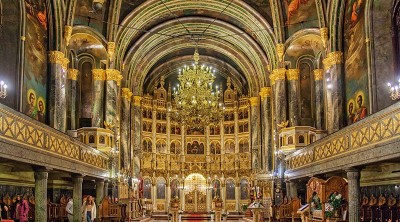 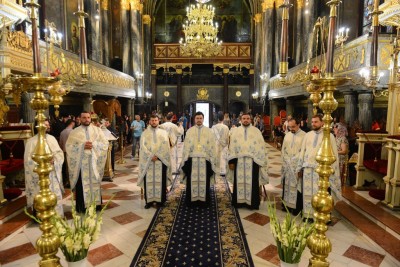