8 days for a tour of Transylvania and painted Monasteries

Why choose this: Who wishes to make a circuit with an english-speaking guide in Romania, interacting with the local population, learning about the traditions of the most preserved areas of the country, visiting the famous monasteries with frescoed churches chose the right tour. We have created a tour of Romania including two very famous regions: Transylvania and Bucovina.

The offer includes: Transfers based on flight time and transport by modern car / van / bus; Specialized driver / guide who speaks Italian language throughout the trip; Overnight stay for 7 nights in 3 * / 4 * hotels / cottages with breakfast included; Half board treatment (dinners in traditional restaurants or hotels, including water); Traveler fees. SOCA TOUR Romania Non-Stop Assistance;

After arrival at Bucharest airport and meeting with the accompanying guide for the whole tour, we take a panoramic or even pedestrian tour of the city, according to the time. We see the glorious "Bell'Époque" style buildings, the Arch of Triumph, the Romanian Athenaeum , the Revolution Square and the University Square. Welcome dinner with folklore show and overnight stay.

In the morning departure to Sibiu. On the way, visit of Cozia Monastery, erected in the 14th century. Known as one of the oldest historical and art complexes in Romania, the Cozia Monastery is located on the Olt Valley. The elements of the Byzantine architectural style are explicitly declared by the facades of the central church, in alternating bands of brick and large blocks of stone. Arrival at Sibiu, the European Capital of Culture in 2007. We make a guided tour of the historical center of Sibiu, known at the time for its fortification system considered the largest in Transylvania with over 7 km of city walls of which today they retain important vestiges. We can admire the Big Square with the particularity of the city: the roofs with "the eyes that follow you", the Small Square with the Evangelical church in Gothic style of the fourteenth century, which preserves a particular fresco that represents Jesus in 7 different images. The church is also known for its organ, considered the largest in Romania, with 10,000 pipes. We take the dinner in Sibiel, with the farmers, with typical menu. For accommodation in Sibiu in a 4 * hotel, a supplement of 15 EUR / person is charged.

After the breakfast departure for Sighisoara. We take a break in Biertan, a village founded by Saxon colonists in the 12th century and which was an important Lutheran market and bishopric until the last century throughout the 16th century. After we visited the fortified church of Biertan, built at the highest point of the village in the 14th century, as a hall-style church in the Gothic style, surrounding it shortly afterwards by a city wall, we go to Sighisoara, the birthplace of the famous Vlad the Impaler, known to almost all foreigners as Count Dracula. Guided tour of the most beautiful and best preserved medieval citadel in Romania; the city is part of the UNESCO World Heritage Site. It dates back largely to the XIV century, when the building hurriedly erected after the Tatar destruction of 1241 and  was enlarged and strengthened. Nine of the fourteen original towers are preserved: blacksmith's tower, shoemakers' tower, butchers' tower, tailors' tower, tower to those of the leathermen, the coppersmiths , etc. The most beautiful and well-known monument in the city is the Clock Tower which was built in the 13th-14th centuries and until 1556 was the seat of the city council. After a short panoramic tour of Targu Mures, renowned for its squares surrounded by beautiful buildings from the Secession era, including the most majestic: the Prefecture and the Palace of Culture, we arrive in Bistrita. Dinner and accommodation.

After breakfast at the hotel we get to Bucovina, crossing the Tihuta Pass. The whole afternoon will be dedicated to the guided tour of the Monasteries of Bucovina, registered in the UNESCO World Heritage. It will start from the Voronet Monastery which is considered the jewel of Bucovina for the famous cycle of external frescoes that decorate the church, the most famous being "the Last Judgment". The next stop is at the Moldoviţa Monastery, surrounded by fortifications and frescoed externally, followed by a visit to the monastery of Suceviţa (1582-84) renowned for the important fresco "the Virtues Scale" and for its imposing city walls. In the end of this day, we arrive at Marginea, a village known for the archaeological finds of black ceramic dating back to the Bronze Age.

We take the breakfast at the hotel and then we will visit the International Egg Museum and after we visit the Fortress of Neamț, where you can also see the changing of the guard in the fortress, in some days. We arrive in the evening in the beautiful small town Piatra Neamt.

This day we go to Brasov, crossing the chain of the Carpathian mountains and the Bicaz Gorges, the most famous canyon in the country, 10 km long, formed by Mesozoic limestone rocks 300-400 m high, passing next to the Red Lake, which was formed in 1837 following some landslides. It is a particular lake, as it is full of dead tree stumps, which sprout from the water. The reddish color is due to the suspended iron oxide deposits. In the afternoon we will reach the city of Miercurea Ciuc, crossing the heart of Transylvania. In Brasov, the most fascinating medieval town in Romania, we can admire the Schei District with the Saint Nicholas Church, the first Romanian school (XV century), the Black Church and the ancient fortifications of the city with the bastions of the guilds. Typical evening in a local restaurant.

Today we continue our journey with the visit of Bran Castle, known by the name of Dracula’s Castle, built in the thirteenth century by the Teutonic knight Dietrich and restored in later periods. The next objective of our trip is Sinaia, called the Pearl of the Carpathians, the most famous mountain resort in Romania. Here we visit the Peles Castle, the summer residence of King Charles I, where we can admire numerous statues, balustrades, vases, fountains, niches and mosaics. In the evening we will arrive in Bucharest, where we take a panoramic tour dedicated to the discovery of Romanian’s capital, called "The Little Paris of Eastern Europe", admiring its wide avenues, the glorious "Belle Epoque" buildings, the Arch of Triumph, the Romanian Athenaeum, the Revolution Square, the University Square, the Old Court , the Patriarchal Cathedral (spiritual center of the Romanian Orthodox church) and the Parliament Palace, the second largest building in the world after the Washington Pentagon. Typical dinner at a restaurant / hotel. 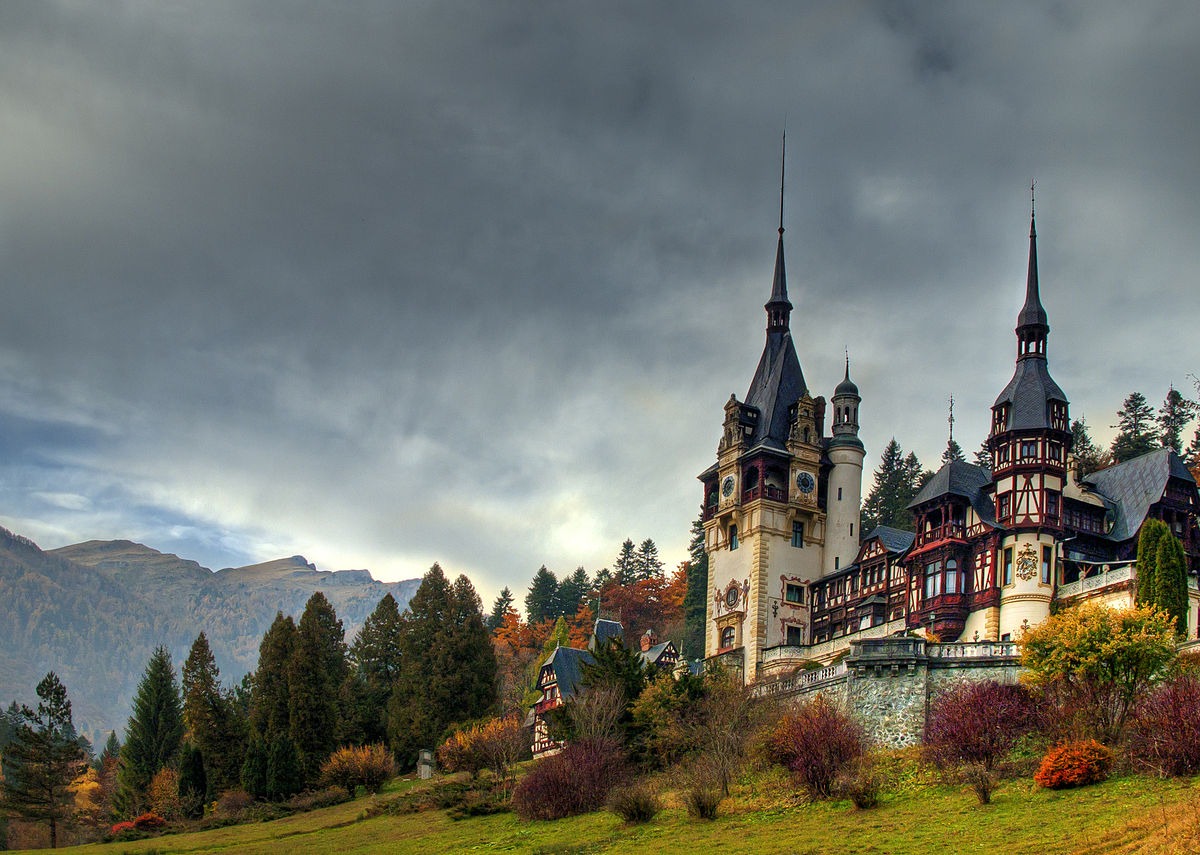 This is the last day which starts with the breakfast at the hotel. Free time for shopping or if you wish, visit of the Village Museum, located in the Herastrau Park, one of the largest parks in Europe. Restored country houses, large barns and functioning water mills fill the narrow paths. The museum illustrates how Romania looked like a few hundred years ago and also how nowadays looks in some historical regions such as Maramures or Bucovina. Alternatively, we can enjoy to Bucharest's Therme, near Otopeni. Transfer to the airport for the return flight to your country.

For groups>19 persons  through Tourism Agencies, check the prices in the PDF format  catalog

For groups via Travel Agencies, send us an e-mail for a correct quote or check the catalog by clicking here.

To add services or change the itinerary by changing some tourist objectives located on the route, contact us by e-mail or by phone.

For extra night pre / post tour with half board, we charge a supplement of 50 EUR / person in a double room.

At the time of booking, you pay a deposit of at least 25%; the balance is paid cash (USD, EUR or LEI) on arrival or by bank transfer before arrival.

Click here to open the conditions and details for booking.

Click here to view the periods with guaranteed departures that have at least 2/4 people in the group. Ask us about the departure situation, maybe it is not updated.

The order of visits can be changed according to the choice of the guide or tourists, based on opening or closing times, weather conditions, etc.

If you want to travel in total autonomy, we send you a quote, including a rented car, a catalog with the objectives to visit and their history, the circuit map, accommodations, non-stop assistance.