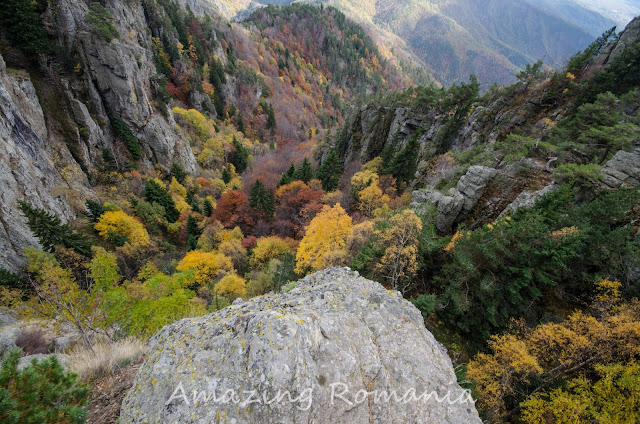 We finally get to write about one of our favourite trips in the mountains. We waited the whole year to write about it because we wanted to share it with you at the beginning of autumn since, we can tell you right from the start, it's the best autumn trip we ever did! :)
Brief useful information:
Day 1:
Route: Turnu Monastery (340 m) - Stânișoara Monastery (signposting: 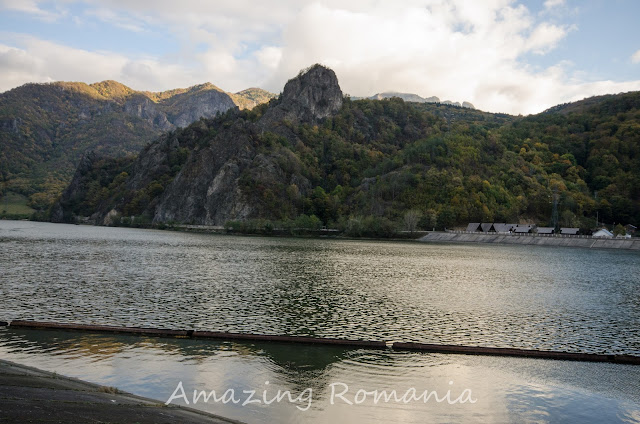 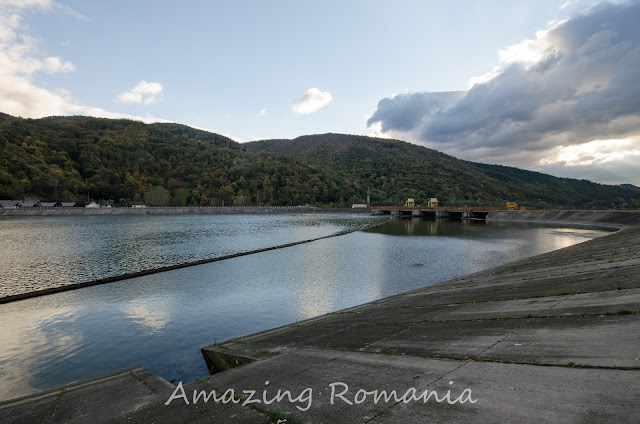 )
For some time we made a plan to go on the perfect autumn trip somewhere in the mountains in order to admire the spectacle of this season right where the show is the grandest: in the forest and above it. After some research we found one of the newest National Parks in Romania: Cozia National Park. We've never been here but we've passed it numerous times as this National Park's edge is on the Olt Valley where one of the busiest highways heading from Sibiu towards Bucharest winds along this river. So, even if we've been really close we had no idea what a beautiful mountain Cozia is. But that's why we're here for: to share with you amazing places we find in Romania! :)
You should leave your car in the parking available at Turnu Monastery. There are enough parking spaces and it's in a safe place. To get there you must cross the dam over the Olt river near the town of Călimănești and then continue on a short dirt road until you reach the monastery. Then you continue on foot into the forest in what was, for us, the best autumn trip ever! :)

signposting on the forest road which starts at the monastery and continues into the forest. It's a steep climb at first but take it slow since you have a lot to see. The noise of the forest alone is impressing, not to mention the beautiful saturated autumn colours of the leaves that form a mosaic-like carpet on the forest floor. Although the road is wide I don't think offroad cars usually travel on it. It's very quiet and relaxing. Also, it's almost impossible to get lost but always keep a lookout for the signposting :P
An important landmark is the wood shed that you can see in the picture above. There's also a stone cross in the background. If you've reached this point you're on the right track :D The trail continues with a different signposting from now on:

. It's pretty flat from here, on a level curve. Not to mention that the scenery is wonderful: leaves on the ground of the most pastel colours, tree roots on the trail coming to the surface and the rocks that from now on complete the scenery until we get up to the cottage. It's very picturesque and we loved a lot this part just before Stânișoara Monastery. Self-explanatory images below :)
At one point you cross a narrow stone corridor between two large boulders. I think it's very spectacular and you can see it in the image above. Leave that aside and you get a bonus. If you climb on the rock to the right you'll get a very beautiful panoramic view over this beautiful mountain and its virgin forests. See for yourself in the images below :)

One thing I should mention is that after taking several pictures on top of that rock a violent wind gust started which almost took us flying :))
We continue our way to Stânișoara Monastery on the trail completely covered by the beautiful autumn leaves. It's so beautiful! We're in 7th heaven :) We do a short descend in a valley until we reach a small creek. From here there are 10-15 minutes left until Stânișoara. You cross over the small creek on a nicely improvised wooden bridge that you can see in the images below. 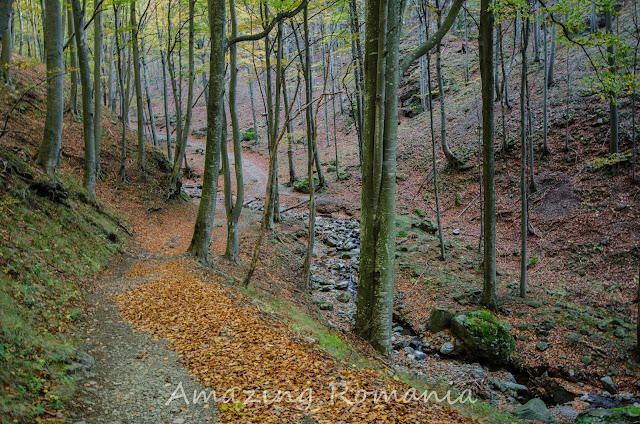 After about 2 hours we reach Stânișoara Monastery. A wooden gate is the entrance point in the courtyard and what a beautiful place it is! It's very well maintained and the church inside is made out of stone bricks as far as we could tell and it fits the place perfectly. As soon as we entered the courtyard a priest welcomes us and invites us to eat alms.

We explained that we have enough food and we don't want to but you couldn't deal with him. He insisted we eat. We ate a bit and then put it somewhere in the courtyard on a table. He saw us and he basically threatened us that we must eat it or we won't leave. He was impossible to convince and we took it and soon after we left we threw it away. That's what happens when a person doesn't understand some boundaries!!! He was completely inappropriate in my opinion. 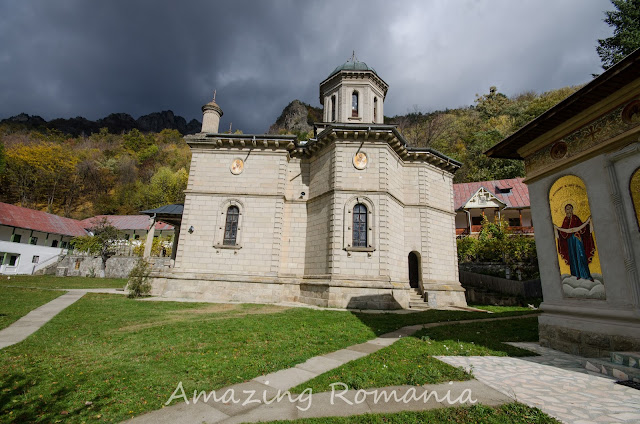 We finally get to one of the two fantastic places in this trip. The second one is in day 2 and if you read further on, you'll discover it as well :) But let me tell you about this one, from day 1.

This place is, I think, the most beautiful panorama point considering all the mountains we've been to! :) It's right on the edge of the trail and there's a rock which you can climb and underneath you is a great abyss. But what a view, especially now in autumn! I would come here from far away just to stand in this point again. It's that beautiful!

It's really breathtaking but combined with the awesome autumn colours it's simply perfect! It's wild, high, rocky and you have a great view over the Cozia Mountain and the Olt river Valley somewhere beneath you. Below you have a few picture that I hope will make you wanna' pack your bags and come here! :) 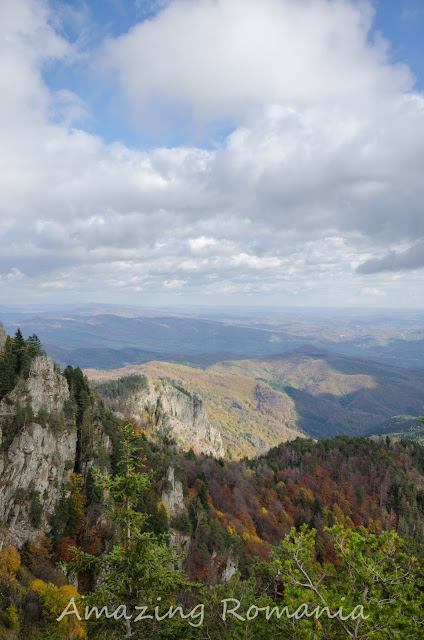 As a tip, the best time to see autumn's crazy and beautiful colours in actions is just after 10-15th of October. That's the climax of autumn colours!

Tens of pictures later we continue our climb and what a climb we have next! It's the most spectacular climb of the day and it crosses huge rocks and you sometimes wonder if the trail has anywhere else to go...but it does! :) You sometimes need you're hands as well to get a grip on the rocks but it's not very dangerous and you can pass it with no problems. Just a bit of attention and do take you're time here since it's not a piece of cake either! :)

As we were climbing the steepest part of the trail fog began to appear. We finally reached the top and saw...nothing! :))) The fog was so dense and rain also started. What a disappointing finale! :)) You can see the "view" from the top in the picture above. From this information pane until Cozia Cottage you have 10 minutes left.
Day 2 (the one with the sea of clouds): Cozia Cottage (1570 m) - Cozia Peak (1668 m) - Cozia Cottage - Turnu Monastery (340m, signposting: 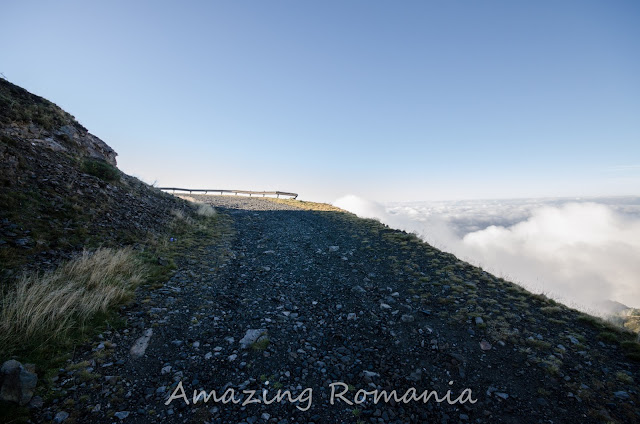 We're going to let you in on a little secret: beside the autumn colours hunt we also came here for another amazing phenomenon: clouds gathering underneath us in the valley forming a sea of clouds. We were certain about autumn's amazing and beautiful colours because we chose the perfect period but we can't say the same about the sea of clouds. This phenomenon was a thing of luck and, as you can see from the pictures above and the ones below, we were pretty damn lucky! :)

When we woke up the next day we were very enthusiastic since we had no idea what to expect considering that we had rain and violent wind the entire night and previous evening. So the tension was high and we honestly didn't expect it to happen. We came out of the cottage and we were in for a huge surprise: it happened, it really happened! We could see it immediately: a huge sea of clouds laid beneath us covering the entire Olt Valley. It was truly incredible and for me personally was the most magical moment in the mountains. Words are hard to describe it so maybe a few pictures will help :)

Admire the sea of clouds in the pictures below and then we continue with Cozia Peak and then the rest of the day's trail going back down to Turnu Monastery :)
After we took tens of picture of this amazing scenery (and ourselves in it) we climb down towards the cottage again and from there we turn right on

signposting. The first part of the trail is pretty flat, following a level curve. Thanks to that we get to admire the sea of clouds which is now to our left. We can't get enough of it! :D
At some point the trail turns left and continues on a different mountain ridge down. You can clearly see the mountain ridge and the trail in the picture above. We "sink" into the forest and into the sea of clouds. It's really cool that you can see the different stages of vegetation: from fir trees and spruce to beech trees. The atmosphere is quite spooky to be honest :)

I don't think this trail is so popular. As far as I remember we didn't bump into other hikers. But don't worry, the trail is visible and there is adequate signposting in most parts. However, I think the main route to Cozia (both up and down) is the one we did a day earlier. However we prefer to climb down the mountain on a different route from the one we climbed up just for the sake of diversity and seeing different views :D
After we re-entered on the right track we followed the

signposting for quite a long time until, at some point, this trail re-unites with the one we climbed up the previous day. From this reunion point we follow the