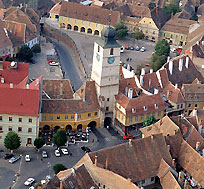 Sibiu (Hermannstadt in German) was the largest and wealthiest of the seven walled citadels* built in the 12th century by German settlers known as Transylvanian Saxons. The riches amassed by its guilds paid for the construction of both impressive buildings and the fortifications required to protect them.

Sibiu's Old Town retains the grandeur of its earlier days when rich and powerful guilds dominated regional trade. Like Sighisoara and Brasov, it has a distinctly Germanic feeling. Sections of the medieval wall still guard the historic area, where narrow streets pass steep-roofed 17th century buildings with gable overhangs before opening into vast, church-dominated squares such as Great Square and Little Square.

Sibiu is a pedestrian-friendly city with two easily accessible levels: the Upper town, home to most of Sibiu's historic sights, and the Lower town, lined with colorful houses on cobblestone streets and bounded by imposing city walls and defense towers overlooking the river Cibin.

Sibiu is home to the first hospital in Romania (1292), the first pharmacy (1494) and the oldest museum in Romania, the Brukenthal Museum, opened in 1817

Traditionally, the Upper town was the wealthier part and commercial outlet, while the Lower town served as the manufacturing area. The historical centre includes the Great Square, Huet Square, the beautiful Passage of Steps connecting the upper town to the lower town, the well-known Bridge of Lies, Goldsmiths' Square and the Small Square.

* The seven walled citadels populated by the Saxons of Transylvania were known in German as the Siebenburgen. 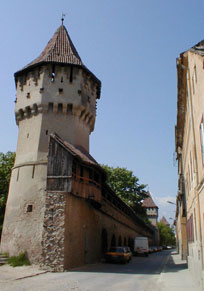 For hundreds of years, this walled town in the heart of Transylvania was one of the most powerful and prosperous strongholds in Europe. Surrounded by imposing walls, Sibiu's original fortifications included 39 defensive towers, five bulwarks, four gates and five artillery batteries.

Although the entire network is remarkably well-preserved, the best-maintained section is the southeastern side which has been reinforced several times throughout the centuries since attacks most often came from that direction.

At the centre of the upper town are three beautiful squares. The Great Square is the site of the Roman-Catholic church and the Brukenthal Palace, where you will find one of Romania's most important art collections. The square is linked to the Little Square by a passage beneath the Council Tower, which is worth visiting for the excellent views over the town. The third square, Huet Square, is dominated by the Evangelical Cathedral.

First mentioned in 1411 as a grain market, the Great Square – the largest square in the city, has been throughout the centuries a quiet witness to the town's lively merchant activity, assemblies and even public executions. Located in the heart of the old walled city, the square was designated an architectural monument by UNESCO and features some of the most impressive buildings in Sibiu. 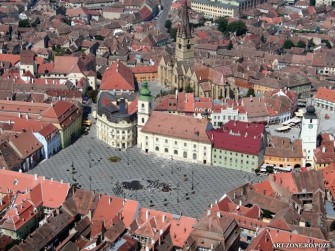 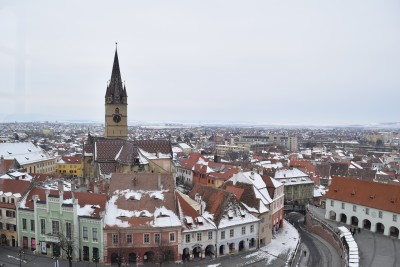 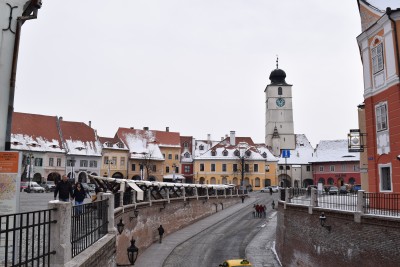