Moldova, a region with a long, beautiful and interesting history

The region of Moldova from Romania is located in the northeast and east of the country and is totally different from the Republic of Moldova, located in the east. It has the following counties: Iasi, Vaslui, Galati, Botosani, Neamt, Bacau, Vrancea and Suceava. In 1859, the historical region of Moldova unites with Romania, and Moldova beyond Prut known as Bessarabia, becomes part of the U.R.S.S. in order to become known as the Republic of Moldova at its destruction.

Do you want to discover the area of ​​Moldova? Click here and find out how

Bukovina has acquired an identity distinct from the rest of Moldova after it was annexed by the Habsburg Monarchy in 1774. It currently comprises part of the counties of Botosani and Suceava. After the collapse of the Austro-Hungarian monarchy and the dismantling of the empire in national states, the National Council of Bukovina (C.N.B.), meeting on November 28, 1918, mostly decided the Union with Romania. The majority votes came from Romanians, Germans, Jews and Poles, and those against only the Ukrainian minority. Following the ruling "C.N.B.", the Romanian troops entered the territory, under the command of General Iacob Zadik, sanctioning the act and hampering the military maneuvers of the People's Republic of Western Ukraine. The union of Bukovina with Romania is officially recognized, in 1919, by the peace treaty of Saint-Germain-en-Laye concluded with Austria on September 10, 1919.

Among the spiritual riches of the two regions are:

Putna Monastery is the first and most important foundation of the ruler Stefan cel Mare. For more than five centuries, it has attracted believers through its history and legends. The monastery is located between Obcinele Bucovina, in a picturesque place surrounded by wooded hills and wild landscapes.

This is one of the most famous churches in Romania, becoming famous by the remarkable frescoes painted in the unique shade of blue as the one of the sky. Voronet is located just 4 km away from Gura Humorului. Built in 1488, the Voronet church retained its original unaltered shape. The rounded tower gives it impetus to the sky, and the stone base is the sign of happiness, of the ancestral roots that have lasted over centuries. 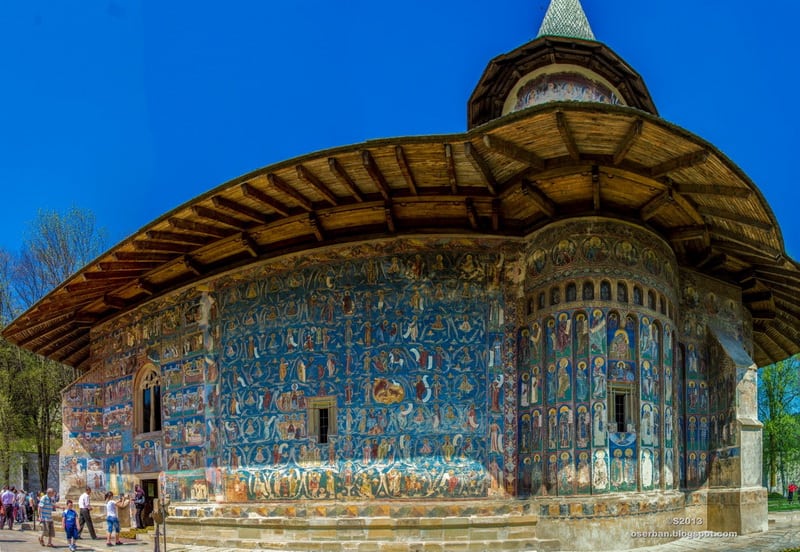 Moldovita Monastery is located 25 km from Campulung Moldovenesc, hidden among the forested ridges. In the past, on this place, the hermits founded a wooden church, and around it were raised cells, thus forming a spiritual community. With the expansion of the shrine, the wooden church was replaced by a stone one, whose ruins are still visible today. Near them was built at the beginning of the sixteenth century the current monastery. Moldovita is a true jewel of medieval Moldovan art, having very well preserved paintings while preserving the brightness of the original colors.

The Sucevita monastery is in a fairy tale landscape, on a path of overwhelming beauty that winds through the valleys and richly forested peaks. Located inside a stone wall meant to protect it from navalists and flanked by five reinforced guard towers, the monastery is the foundation of the Movila brothers, a family of boyars and princes. The monastery is considered to be the last place of worship in Moldova with the facades of the painted church, a characteristic feature of the reigns of Stefan cel Mare and Petru Rares. In Sucevita, tradition and innovation blend in an original way in the exterior painting, dominated by a green emerald intensity. In the frescoes are represented narratives from the Old and New Testaments, but also so rarely met "Scale of virtues".

It is near Suceava, was founded by Toader Bubuiogin in 1530.

It is an orthodox monastery of nuns near Targu Neamt, built between 1641-1643. Here you will find the frescoes painted by Nicolae Grigorescu.

The largest Orthodox monastery of nuns in Romania, located in the village Văratec, near Targu Neamt. It was founded in 1785.

Monastery of monks, located in Neamt county. It is the largest and oldest monastic settlement in Romania, being declared a historical monument.

Monastery of monks, located in Neamt county. The first founding took place in 1655 by the priest Athanasius together with seven of his disciples. The hard times that followed led to the ruin of the church and that is why, in 1734, Bishop Gheodon of the Roman built a new church, made of stone, on the site of the old one. The building is built in classic Moldovan style.

The church from Targu Ocna, Bacau county, is located 240 meters underground, the only church in Europe built almost entirely from salt. This prayer house was founded only by the miners who work here. Passing through the darkness of the galleries, the miners arrived in front of the icons from where they raised prayers for help and avoiding accidents. The church built here, even at the cost of the lives of some workers, blesses the work and prayer of those in need.

All the objects in the salt have been treated with a special lacquer, in order not to attract moisture and to ensure resistance over time. The church is brightly lit, and none of the elements of Orthodox architecture is missing, the head being made up of 24 icons, one representing St. Varvara, the spiritual patron and protector of the miners. Also here, in Targu Ocna there is also a whale-climatic resort, with springs and treatment rooms in Salina.

Besides these religious attractions and tourist objectives, the region of Moldova is dominated by castles or fortresses, and on the natural side, the national reserves and parks attract tens of thousands of tourists every year. Of these, the most well-known and most beautiful, which are fully worth visiting are: Nemira Reservation from Nemira Mountains, National Park- Ceahlau Mountains, National Park Cheile Bicazului, Natural Reserve Cheis Tisitei, Natural Reserve Cheile Cozei, Castle Studza (Miclauseni), Neamt Fortress, Petrodava Fortress and many more. Besides these, Moldova is the place where some of the most important Romanian writers, poets, rulers or artists were born or lived, so the multitude of memorial houses puts its mark on the region.