Sinaia Monastery- The Cathedral of the Carpathians

Sinaia Monastery is an Orthodox settlement in Sinaia, Prahova County.

The monastery of Sinaia was built in 1695 by the great backbone Mihai Cantacuzino, the son of the late Constantine, and named by Dositei, Patriarch of Jerusalem, "Buceagul Monastery". The appointment of Sinaia gave the Cantacuzino backpack to the monastery, as can be seen from the "foundation act"

The Sinaia Monastery, nicknamed the "Carpathian Cathedral", located in a natural enchanting environment, represents the historical identity of the city, being the first construction in this territory. 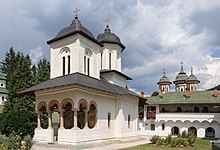 The old church of the Sinaia Monastery

Initially the monastery was built so as to house twelve monks (following the model of the Savior Jesus Christ who chose twelve apostles), but over time their number increased, and it was necessary to build another larger church and some additional cells. The new constructions (what is called today the "new courtyard"), were made between 1842-1846, by the care of the abbot Joasaf and Paisie. Due to its strategic position, the Sinaia Monastery met numerous Turkish and Austrian invasions, which partially destroyed the monastery.

At Sinaia Monastery there are not only three hundred years of history, but a true museum of Romanian art and spirituality. The old church is built in the Brancovan style, characteristic architecture of the Romanian Country, style bearing the name of St. Voivode Constantin Brancoveanu (martyred in Constantinople by the Turks in 1714).

Particularly impressive is the church portal, which is carved, depicting Moses with the Tables of the Law on the right, and on his left side his brother, Aaron, with the leafy staff. In the middle of the portal is the coat of arms of the founding family - the Cantacuzino family - the bicephal eagle that holds in the claws the imperial signs of power: the scepter and the cross. The porch and naos painting is the original one, made by Pârvu Mutu Zugravul, the favorite painter of the Cantacuzinians.

It should be noted that he was the one who built the first hospital in the Romanian Country - Colțea Hospital, in Bucharest, and that his whole life encouraged charitable works.

The Sinaia monastery also has a beautiful paraclis, dating from the same period - 1695. The paraclis is a small church, a chapel, specific to the bishops and to the episcopal or metropolitan monasteries where daily services are held.

Also in the courtyard of the old monastery, near the paraclis, is the tomb of Tache Ionescu, prime minister during the First World War, which played a very important role in uniting the Romanian countries after the war. Being ill, he healed at the Sinaia Monastery, leaving by will the desire to be buried at the monastery where he was healed.

Located in the new premises and dedicated to the Holy Trinity, the great Church was built of stone and brick between 1842-1846 through the efforts of the monks who lived here. The oil painting was executed on a mosaic gold background, in a non-Byzantine style, by the Danish painter Aage Exner. He made a synthesis of the Romanian religious architectural culture, a church with thick walls and strong buttresses, characteristic of the monasteries of Moldova on which he engraved the specific elements of the Brancovan style of the Romanian Country.

Through the care of King Carol I, the large church of the Sinaia Monastery was endowed with electricity, being the first electrified church and monastery in Romania. The royal family lived during their vacations in Sinaia, at the monastery for 11 years, starting with 1871. After their relocation to the castle, when they celebrated 200 years since the monastery was founded, they were arranged in these spaces (old residences). royal) a religious museum that works today and which was the first Romanian religious museum. The monastery museum contains objects of worship, the first Bible translated and printed in Romanian in Bucharest (by the care of the ruler banerban Cantacuzino, in 1688) and a magnificent collection of icons.